What Is An Android Instant App And Why Should You Build One?

Mobile apps have come a long way since the introduction of the first smartphone. Apps are evolving and getting more convenient like web apps and PWAs that are better in terms of performance and space requirements than native mobile apps. Android instant apps are another big revolution in the realm of mobile applications. Google introduced instant apps in 2016 giving a piece of brief information on the benefits of these apps.

Use of the instant applications brings numerous advantages for both the end-users and businesses. Since these apps don’t require installation to access their content, users are more likely to use the apps. When using the app, users have access to only important and necessary features and content. You can hire app developers to build an instant app and gain a competitive advantage for your business. By using these apps, you can remove all worries of space requirement, internet speed, performance, etc.

In the evolution of mobile apps, instant apps are a great step as these apps are the fast and powerful variations of native mobile apps. Android instant apps look and function like the other applications installed on your mobile device, but they are very different. You are not required to download anything to use such applications.

Instant apps are modularized forms of native mobile apps. It means instant applications are built by dividing native apps into small modules. And, each of these modules comprises a compartmentalized portion of the native mobile app. These modules will display independently and only the necessary modules are presented to the users.

You can choose a mobile app development company to create your own instant app for your business that will work directly from the Google play store. Android app technology allows developers to create applications that can be launched directly from Google play store without even installing or downloading anything on a device. Though instant apps appear similar to web apps they work like native mobile apps.

Get an Android Instant AppContact Us

Do you really need an instant app?

You can think of Android instant apps as the lite versions of native apps. So, these apps not only save space but they also function with more speed than native apps. An Android app development company needs to focus only on improving user experience and retention rates instead of bothering about dozens of app metrics. Some reasons for why you need an instant app are as follows:

What benefits can your business leverage by using instant mobile apps? 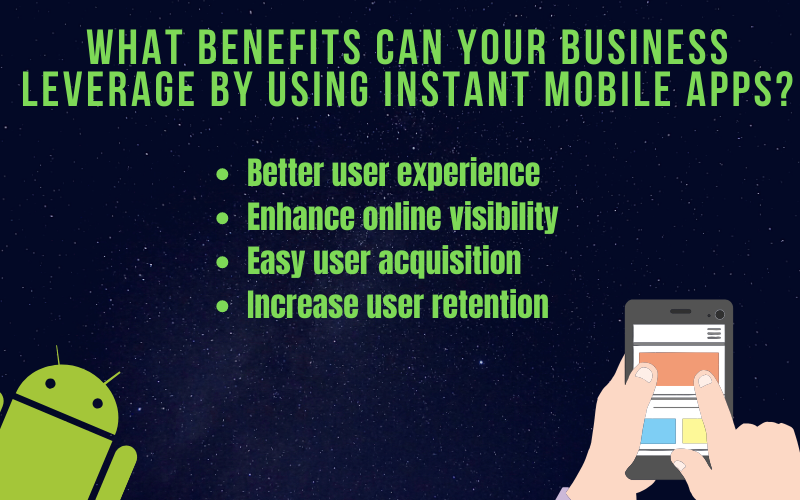 Businesses can derive great benefits by using instant apps. The users will be disappointed if your app doesn’t provide a good user experience. Instant apps enhance user experience due to fast speed and powerful functionality. They offer the same experience as a web app. When users click on an instant app’s URL, they instantly receive the desired content. These apps are easy-to-use, highly responsive, and user-friendly that provide a better user experience.

Instant apps make it possible to access your app content from outside the app. So users can find your business because your app will become discoverable on search engines. People will be able to search your app like websites on the internet resulting in increased traffic. Instant mobile apps enhance traffic and bring more users.

A key advantage of using instant apps is that these apps allow users to complete the desired tasks without forcing them to download and install the application to their devices. With this feature, you can attract users to your app. Since instant apps are built on Google Play Services, a simple app link is enough for users to access lots of features. So, apps can reach millions of users who can simply tap to run the app. The app can also be used via NFC or QR code.

Instant apps allow users to use the app again and again anytime without installing it. Often users struggle with two main options – mobile web and native apps. Users can install an app for specific features, but when they need free space on their device, unimportant apps are removed first. If your app has poorly optimized ads, it will slow down the app and kill the user experience. Instant apps help you build trust among users as they offer a great experience. Users will be tempted to use your app due to easy-to-use options, fast-speed, and better user experience in your app. So, more users will stick around your service.

Here is the process to upgrade existing apps to instant apps 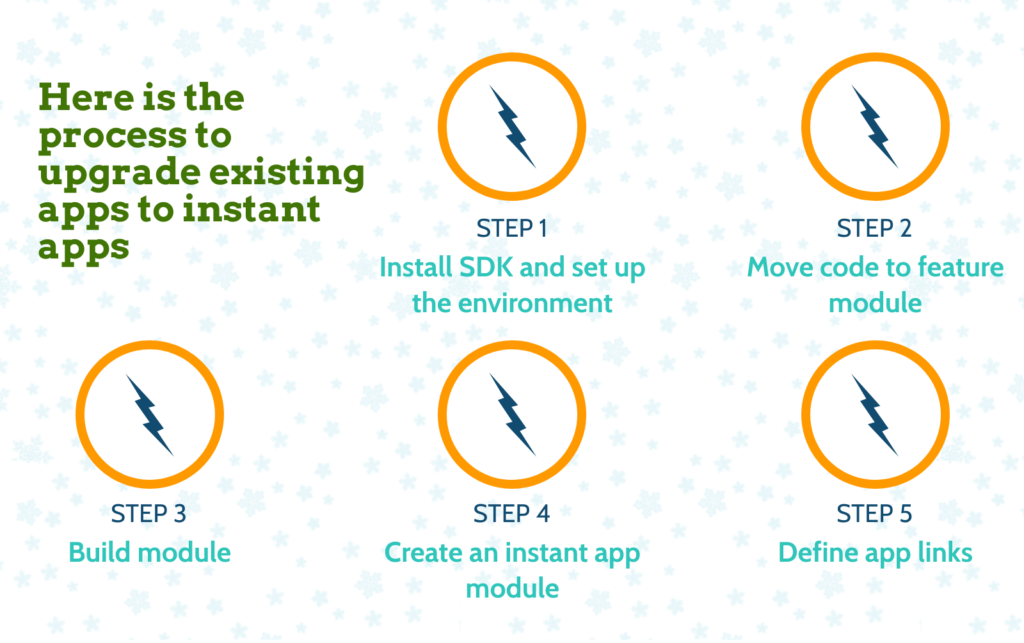 Upgrading an existing Android app to an instant app is a pretty easy process. Developers need not create a new separate app, but they can utilize the existing app code, API, and project to build a new instant app. However, the efforts that you need to put into updating the app rely on the structure of the app. The following are the steps to update an existing app to the instant app.

Step 1: Install SDK and set up the environment

Set up an emulator that runs Android 6.0 or higher. You can hire Android developer to complete this and further steps to create an instant app for your business.

In this step, the existing code needs to be moved to the feature module to create a minimal app module. Do this:

You can do this by altering the plugin to com.android.feature from com.android.application. Rebuild the project to turn source code into a reusable library module.

Now you need to build the APK Module. For this go to File > New Module and input the app name “app apk”. Replace all dependencies in app aapl. Remove the app element from the AndroidManifest.xml file to keep a single manifest element. App’s functionality now transformed into a shareable feature module.

Talk to Our ExpertContact Us

URLs are the single method for launching instant apps. Thus, a relationship needs to be created between the website and the app for setting up the instant app runtime. You can also do this by using the ‘App Link Assistant’ feature of Android Studio.

An Android instant app is an innovative idea to make apps available to users without installing them on their devices. Entrepreneurs and startups can utilize these apps to gain a lot of benefits to their businesses. They can choose a top Android app development company to build effective instant apps and derive benefits in terms of increased traffic, high user retention, and increased user acquisition.

By using these apps, businesses can focus on more important things like enhancing user experience than considering multiple app aspects. These apps provide good growth opportunities for startups and entrepreneurs. Moreover, when it comes to creating these apps, several ideas will hit your mind. However, Google recommends using material design for Android to create engaging and attention-grabbing applications.

If you want to turn your unique instant app idea into reality, we at Sparx IT Solutions can help you with the same. We are a leading mobile app development firm that has delivered successful app solutions to a lot of businesses around the world. You can entrust your app development project to us and we will create an outstanding solution that will fulfill all your expectations.

293
Previous PostExtending Support To Ex-Sparxians During COVID Crisis
NEXT PostHow to make an appointment booking app?