Aarogya Setu Is More Than A COVID Contact-Tracing App

Ever since India’s COVID-19 Bluetooth-contact tracing app; Aarogya Setu was launched, it has been breaking records and making headlines around the globe. From becoming the world’s fastest app to reach 50 million downloads in the first two weeks to become the world’s first government product to get open-sourced at this scale, Aarogya Setu has caught the attention of the technology industry.

Being an active contributor to the IT industry from the past 12 years, the Sparx IT Solutions team cannot stop themselves from praising the incredible initiative by the Government of India amid this period of the health crisis.

Since its launch, the Government is receiving reviews regarding the security threat in the app and how the data of 100 million Indians are at stake. Although the developers of the Aarogya Setu app have turned down every accusation with sufficient proofs every time.

Finally, after 40 days, the makers decided to give the top technical brains a chance to inspect the source code and come out with solutions to eliminate the security risks. The source code was released on 26 May on GitHub (an online code repository) for all the developers.

After the Aarogya Setu code got open-sourced, French Security Researcher Elliot Alderson wrote on Twitter, “This is a very positive news and I’m very happy that the Indian government took this direction. Now, we would like to see what is happening on the server side.”

Instead of analyzing the pros and cons of making the source code public, let us celebrate the confidence and determination of the Government of India. With this decision, the makers have stood true to the three principles of Aarogya Setu; transparency, privacy, and security.

Besides being an application with a size of 115 million and support to 11 languages, Aarogya Setu has high-etch functions and applications that are helping India to fight against the COVID attack.

In this blog, you can find out everything about this app as we are going to resolve the following common queries about Aarogya Setu: 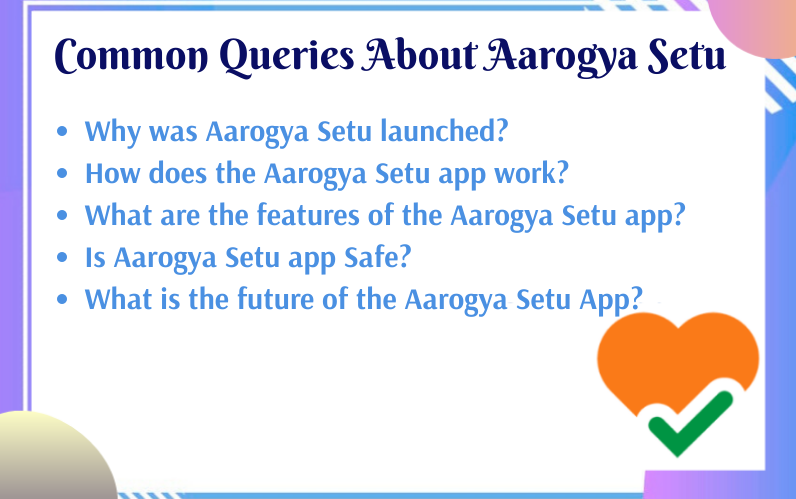 Why was the Aarogya Setu app launched?

Before the start of the second countrywide lockdown due to the outbreak of the pandemic, the Aarogya Setu app was launched. The Indian Prime Minister, Narendra Modi advised the citizens to use this app during his announcement for Lockdown 2.0.

The core motive of the Aarogya Setu app is to spread awareness about COVID-19 among Indians and connect COVID-19 health-related services. It is a contact tracing app that guides the citizens on coronavirus precautions and suspects. 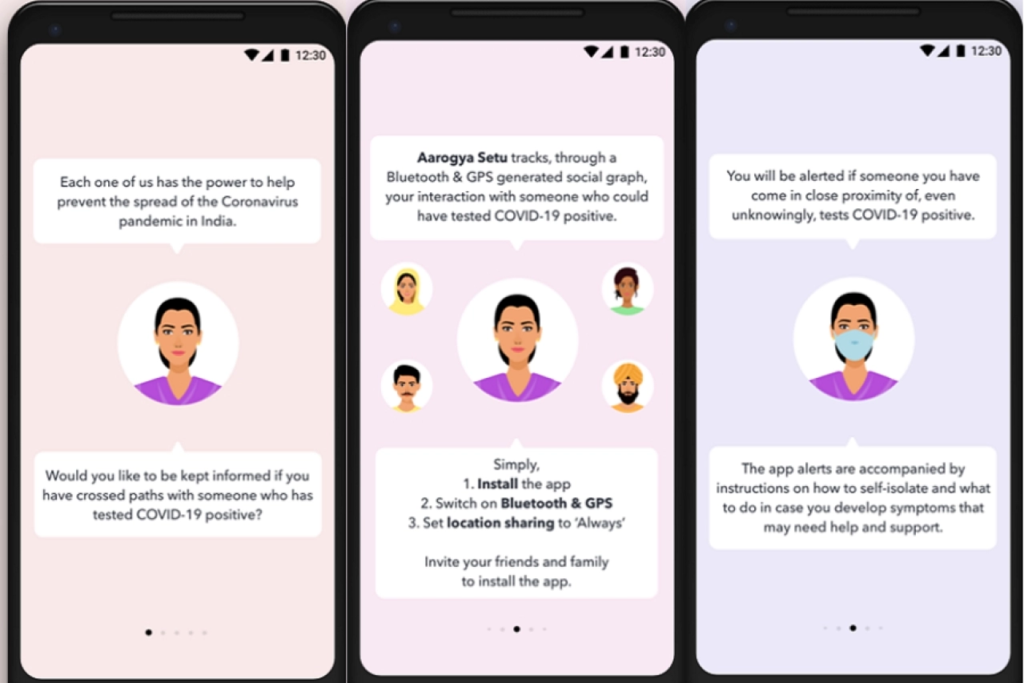 In order to track the coronavirus infection, Bluetooth and GPS features of smartphones are accessed by the app. Both Android and iOS mobile app versions are available for people. It scans the known cases and indicates the risk of new cases in your area with Bluetooth tracing.

How does the Aarogya Setu app work?

As mentioned in the last answer, it uses the Bluetooth feature of the smartphone to identify risks around your area. It identifies them as hotspots and maps them to curb the problem of community transmission.

With the use of geo tagging, this app alerts a user about a suspected case in their proximity. This helps Indians in keeping themselves safe and take necessary precautions according to the risks around their area. In order to understand the complete work process of the app, we are describing the four sections of the app below: 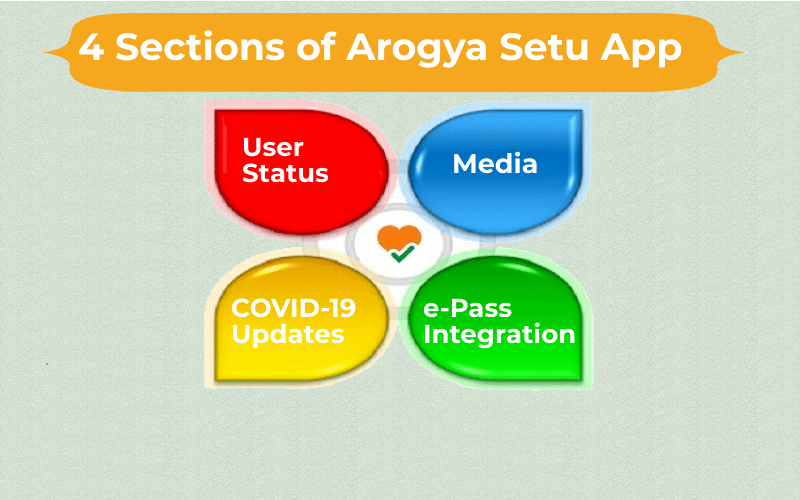 Under this section, the user is informed about the risk of getting COVID-19. The hotspots are identified to notify users about a nearby area where a person is at high risk for the infection. It is traced up to the proximity of 10 km.

In this section, the latest COVID-19 related videos and articles are shared. This section includes videos under heads: celebrity videos, positive harmonies, learning center, how to boost immunity, advice from a doctor, what will the app do, and trending videos. Apart from these videos, guidelines for Air passengers can also be downloaded from this section.

The app gives updates on coronavirus cases in the nation as well as all over the world. Confirmed, recovered, and deceased are the three categories under which the cases are presented. It keeps users informed about the latest number of COVID patients state wise in India.

The e-pass which shows QR code will be available on the app. This e-Pass will only appear in this app if the person has applied for it according to the government rules. Aarogya Setu app does not have a feature for applying for this pass.

The QR code stores information about the user and their nature of work. It also stores other related information like pass validity, company name, etc. With this section, this app has become the primary facilitator for travel across the nation.

What are the features of the Aarogya Setu app?

Aarogya Setu app was launched with limited features to curb the spread of COVID-19. But with the passage of time, in the span of one month, many other features with regular updates in the Aarogya Setu app. Here are a few features described in detail:

A self-assessment test begins after you download the app. Users are asked for Symptoms like cough, breathing difficulty, fever, etc. After this, symptom checkers ask about ailments like diabetes, heart diseases, lung diseases, etc. Under general information, foreign travel history of the past 14 days and contact with a COVID-19 positive person is also asked.

Things to do next:

This comes under the “your Status” section. Below “your risk of infection”, you can click on “things to do next” button to check the Aarogya Setu app’s advice. Under this head, steps for social distancing are explained along with the PDF files on how to stay safe.

The Aarogya Setu App allows users to donate via the PM Cares website. Under your status section, the link is provided for easy access to the website. PM cares is an emergency situation relief fund launched by the Prime Minister of India.

With the constant accusations of privacy-related concerns of the app, this section was added. It answers the basic questions like, “why does this app collect GPS info?” Or “how long is the info stored on my mobile phone?”. These FAQs help users to trust the app and clear all their doubts related to its privacy.

On the home screen, the “call helpline” button is provided which can be used by users to ask questions about the COVID-19. Over the call., the users share their inputs and experts’ advice about the next steps.

IMCR approved labs are listed for COVID-19 testing facilities. It allows users to take quick action in case they have any symptom or travel history of foreign countries’ visit. Under the head of useful resources, FAQs related to Aarogya Setu are also provided to help users with app usage.

The privacy of the Aarogya Setu app has been questioned again and again. After the app’s launch, French Security expert wrote on social media “I installed the app and I have one hour in front of me, let’s see what I can find”

In the next two hours, he informed app makers that he has access to information. This was later resolved by the developers. But the security concerns and accusations still exist. Following which the government open-sourced its code.

To provide you better clarity, here are some facts about the privacy of Aarogya Setu App:

What is the future of the Aarogya Setu App?

It will help in detecting the symptoms as well as the movements of users. With the constant addition of features in the Aarogya Setu app, it is becoming one of the world’s first and most used COVID contact tracing apps.

Despite facing security accusations, the Government of India has shown the courage to open-source the Aarogya Setu app code. The motive behind its launch is still served impeccably. Finally, the complete tech industry is invited to make the Aarogya Setu app a robust and secure technology solution for India’s fight against COVID.

Aarogya Setu has become much more than a tool to spread awareness about the coronavirus pandemic among the citizens. Today, traveling, healthcare services, and national integrity is well-supported by this COVID contact tracing app!

Being an IT industry veteran, Sparx IT Solutions is amazed to see the brilliance of tech experts who created this app. The Indian techies have done an extraordinary job and inspired every industry participant including us. Kudos to their hard work!

705
Previous Post2010 vs 2020 Designs of Top Mobile Apps: What Brought About This Drastic Change?
NEXT PostHow are industries using AR to revamp business?